At first glance, you might mistake the Samsung Gear Fit2 or Gear Fit2 Pro for a Garmin or Fitbit fitness tracker. They have signature long, rectangular screens and bands that differentiate them from most smartwatches with square or circular screens.

They come in different sizes and colors to give you a little choice in style, but what we’re really going to look at here is the difference between these two models. The Gear Fit2 was released in June of 2016, while the Gear Fit2 Pro followed it in August.

While the Gear Fit2 Pro can be seen as an improvement, the Gear Fit2 still retains many of the same or similar tracking features that the Pro currently has. The price difference isn’t too big between the models, which gives you more of an incentive to consider either model for your newest fitness buddy.

The choice of coloration used in the design of the Gear Fit2 series is surprisingly intuitive. Displayed stats appear in bold contrast against their background, making the fitness tracker very legible. That’s the beauty of the long touch screen—everything is large/oversized, so you can check on your stats in the middle of a workout, and then get right back into it.

The Gear Fit2 and the Pro are very similar to each other at face value, aside from minor aesthetic changes around the band and case. If you were a fan of the Gear Fit2, you’ll be delighted to know that the Pro retains many of the same futuristic looks as its predecessor.

The touchscreen on both models is user-friendly, and the display really pops out at you. There won’t be any need for squinting in low light given the execution of its display.

We’re all quite well aware of the bells and whistles that come with Garmin and Fitbit products, the pioneers of the fitness tracking industry. Given the notoriety of both of those brands, it would be easy to dismiss Samsung because of its relative “newcomer” status the wearables category. Thankfully Samsung’s product development team played close attention to its competition, and the Gear Fit2 line of trackers is perfectly capable of keeping up with other units on the market.

Although both devices deliver offline music playback, they each do it quite differently from one another. The Gear Fit2 has onboard storage space for you to load your own music library (if you still have a music library), whereas the Pro can download and store Spotify Premium tracks and playlists if you’re a Spotify Premium subscriber.

Both models are compatible with Android phones version 4.4 and up and iPhone models (iOS 9) greater than or equal to the 5.  On minimal usage, both models batteries can last up to five days. With consistent usage, average battery life is around three days.

Let’s take a look at the various features on both models:

Shop for the Gear Fit2

The Gear Fit2 is not waterproof. Some users have reported it to be malfunctioning even after taking a shower.

Shop for the GearFit2 Pro

The Gear Fit2 Pro’s fitness apps are now powered by Under Armour. Overall, they aren’t too different from the onboard features that came with the original Gear Fit2. However MyFitnessPal, Under Armour renowned fitness app, will definitely provide you with a lot more options to diversify and trick every metric in your workout.

In truth, you can track many different workouts through heart rate, pacing, and rep counting.

It appears that the Gear Fit2 Pro has the slight edge in diversity over its predecessor. The differences aren’t tremendous, and there are still plenty of happy customers that wear their Gear Fit2’s. The Gear Fit2’s are affordable, especially when holidays sales kick in.

Some of the biggest gripes about the Gear Fit2 series half to do with the accuracy of the various metrics. Many users have reported them malfunctioning or counting odd numbers of steps, reps, or laps compared to how far the user has traveled.

Battery life is another complaint that seems to be consistent with Samsung products. Granted, these are very new products less than two years old in total and the fitness tracker industry is constantly improving upon itself. Firmware and software updates are usually the next step after a new product like the Pro has been released, so expect to see some changes if you end up purchasing the Pro. 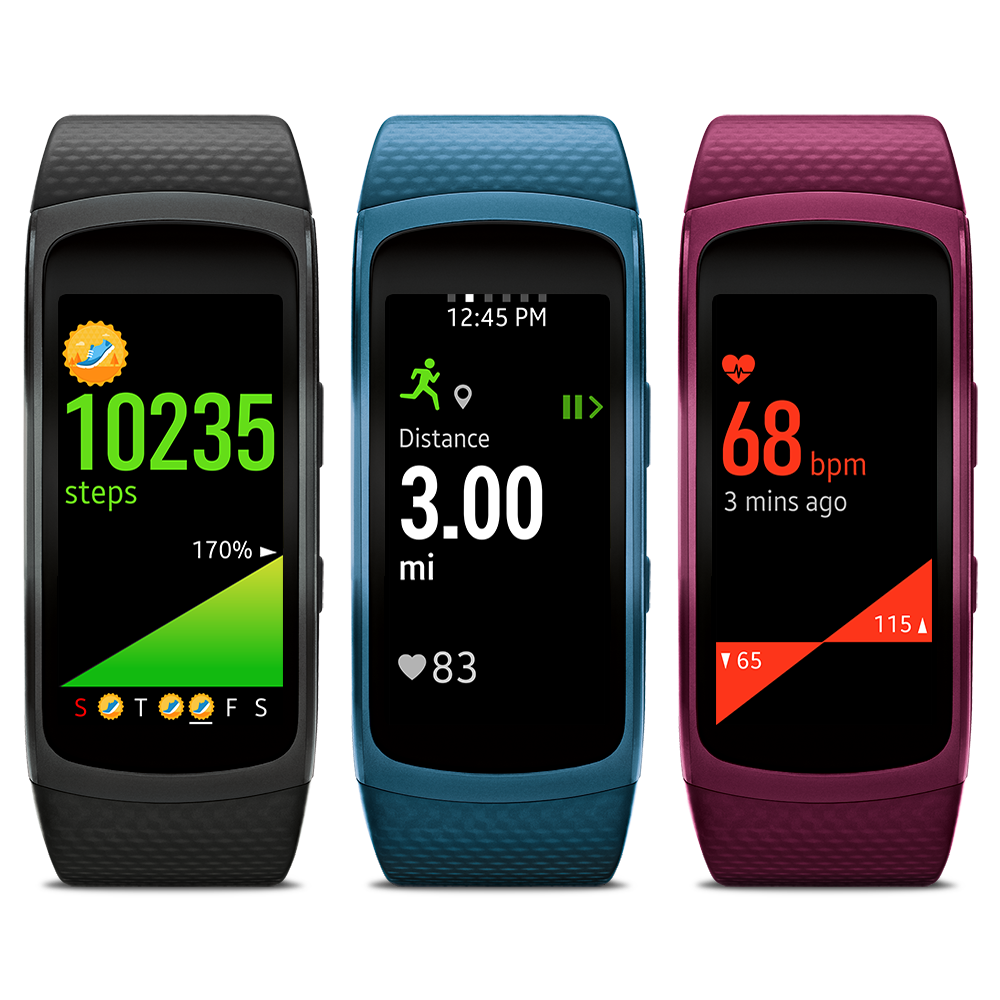