This model has been discontinued.

Historically, Fitbit’s entry into the smartwatch market with the Ionic tended to be discussed only in the context of the Apple Watch Series 3. This is really too bad, as the Ionic is a great device that offers different things than the Apple Watch. Unfortunately, in March of 2022 a recall was issued for the Ionic due to concerns about the battery.

It’s unfortunate because the Ionic has a lot going for it: excellent tracking capabilities, long battery life, built-in GPS, and more. It also has some drawbacks – most of which come from the newness of the device and the technology. For some, this isn’t a big deal and they are fine with going along for the ride as Fitbit releases new versions, new apps, and new features. This includes reported forthcoming tracking capabilities of both glucose levels and sleep apnea.

For others, however, the device might feel lacking, especially when it is pitted against the third iteration of Apple’s iconic Watch. But before we talk about how it stacks up to the Apple Watch Series 3 (which we just tested and reviewed), let’s take a look at our review of the Fitbit Ionic.

Set Up and Customization

Set up is easy and intuitive. The Fitbit app walks you through the whole process of setting it up and setting goals (which you can change at any time).  Small and large bands are both included in the box, so you do not have to worry about which size to buy. Customization is one area that the Ionic feels to be a little bit lacking. There are plenty of watch faces available, but you cannot customize them. There are also painfully few apps (though, as we mentioned before, this is to be expected and will change in the future as developers create them). One customization area I really appreciated is exercises on the watch. To switch them up, you need to go to the Fitbit App and navigate to Exercise Shortcuts. From there you can choose up to 7 exercises from a list of 20. The Ionic’s built-in GPS helps you keep track of your route and elevation changes for outdoor runs, walks, and hikes.

There also isn’t an option to customize notifications, if that’s something you’re interested in. The notifications you can get are completely dependent on your phone’s settings and the proximity of your phone. You can turn certain notifications off by pressing down on a notification from the app (Facebook or Snapchat, for example) and selecting “Off.”

Let’s take a look now at the smartwatch features of the Ionic.

If we divorce the conversation from the Apple Watch and concentrate on the Ionic’s features independently…well, it’s still a bit disappointing as a smartwatch. The Ionic offers notifications from your phone like texts, social media (like Facebook, Instagram, and Snapchat), and calendar reminders. But you can’t do anything with them – you can’t respond to texts, for example, or see anything other than a pop up that someone is following you on Instagram. You can reject calls (I’ll admit I used this feature), but that’s about it. Having said all of that, I have to say I was fine with those options. I have no burning desire to type out or dictate a text message on my wrist, nor do I need to be able to answer the phone via my watch. I tested the Apple Watch right before strapping on my Ionic and I honestly saw no need to use most of the smartwatch features on the Apple Watch. Other smartwatch features are pretty standard and useful, including NFC contactless payments via Fitbit Pay and music storage and Pandora streaming. Two caveats to the latter features: adding music to the Ionic is kind of a pain, and you have to have Premium Pandora service to use it on the watch. Personally, I’m keeping my fingers crossed for a Spotify app in the near future.

The Ionic will control the music playing on your phone from most apps. I did run into trouble figuring out how to get this to work. At first, the watch wouldn’t register music playing at all. I tried to re-pair the watch to my iPhone several times; I restarted the phone and the watch and read through some forums on Fitbit’s website. Eventually I contacted Fitbit’s Help chat and an agent walked me through the steps I’d already done. I think we *accidentally* got it working – I’m not sure how or what happened, but it works now. Overall, the Ionic doesn’t feel especially smartwatch-ish, but that was fine by me. If you’re hoping for a smartwatch that will replace your phone in many ways, the Ionic probably isn’t the device for you. However, if you’re primarily looking for things like notifications, music control, apps, and contactless payments, you’ll likely be content with the Ionic offerings. Plus, since it is new, there are possibilities for more things in the future a teaser for the upcoming Fitbit Coach, an app that will be available on its own for your mobile device and available for the Ionic in 2018.

Perhaps it comes as no surprise – it is a Fitbit, after all – that where the Ionic really shines is in its health and wellness features. One important thing to note for Fitbit fans: The Ionic is water resistant to 50 meters and has great swim tracking capabilities. The Ionic represents Fitbit’s most advanced sensors and design, as well as their brand new OS. Fitbit’s acquisition of Pebble and their ongoing quest to improve algorithms and accuracy means that the Ionic is top of the line when it comes to health data. The basics you get on the watch itself are steps, calories burned, distance, flights of stairs climbed, and active minutes. On the app, you can see overviews of your day and of extended periods of time. You can also get more in-depth data about each of your metrics.

The app also gives you even more options to keep track of your daily health and wellness. For example, you can log all your food and your water intake. You can also update and track weight changes. You can adjust goals any time and the Ionic will provide coaching to help you meet those goals. The Fitbit app learns about you over time, so it’s constantly updating and improving the data collection. The heart rate tracking – also always available on your watch and more in-depth on the app – helps you keep track of the fluctuations in your heart rate over time. On the app, you can get a personalized Cardio Fitness Score. I do wish there was focused stress tracking, though the heart rate monitor helps me keep an eye on stress levels myself. I can then utilize the Relax app on my watch to do a two or five minute breathing session and practice mindfulness.

Probably my favorite thing about the Ionic (and Fitbit in general) is the sleep tracking. With Fitbit’s sleep tracking, you get comprehensive insights into your habits and your sleep stages, and it helps you work toward better sleep by showing you consistent data and allowing you to set reminders to stay on a sleep schedule. The Ionic automatically starts tracking your sleep, and so far seems to be spot on in figuring out when I fall asleep and wake up. The Ionic auto-tracks your workouts, but you can launch the Exercise app (and the customized list of workouts) to ensure your tracking is the most accurate. There’s also an app called Coach, which comes preloaded with a few guided workouts. This seems to be a teaser for the upcoming Fitbit Coach, an app that will be available on its own for your mobile device and available for the Ionic in 2018.

Taking the Ionic out of the box surprised me a bit. Though I’d seen plenty of pictures of the device, I guess I was unprepared for how large it is. It looks a little obnoxious because it is so big. Here are the dimensions:

It’s lightweight and it lays pretty flat on the wrist, but the size of the display takes some getting used to. Despite its size, though, it’s very comfortable to wear. I’ve had no trouble sleeping in it, typing with it on, working out in it, etc. I’ve quickly gotten used to having it on, and it never bothers me. The included wristbands (small and large) are flexible and also lightweight; they are made of a standard sports watch material of durable elastomer. The frame is aerograde 6,000 series aluminum.

The Ionic drew plenty of haters soon after its announcement thanks to its square, futuristic design. It isn’t low profile and sleek like the Apple Watch, nor does it follow the trend of mimicking regular watches with a circular face, like the new Garmin Vivioactive 3 or other Android watches. I personally like it, though I’m not sure why. I also like the interface and display. It’s bright, easy to use, and intuitive. I actually like it better than the Apple Watch interface, which I just came from using. The Ionic has touchscreen, of course, but it also has large buttons – one on the left and two smaller ones on the right – that make it easy to quickly navigate to the screens you want. The user experience is well thought out.

One minor issue I’ve had with the display is that it is often not responsive when I raise my wrist. There are worse things in the world, sure, but it has been a bit annoying. Again, coming from the Apple Watch, I have to compare here – the Apple Watch is always responsive to wrist rotation and lifting. I did some perusing in the Fitbit forums and it sounds like this is something many Ionic owners are frustrated by, so hopefully Fitbit works on a fix. Another common complaint about design is the Fitbit logo on the face of the watch. I’m not overly perturbed by it, but it does seem a little obnoxious given the large size of the face – could they have forgone the logo and made the face a little smaller?

I’ll tell you up front that I am not a huge fan of the Apple Watch Series 3 (you can find my full review here), though I’m the first to admit that I’m probably not the target audience for the device. I do like 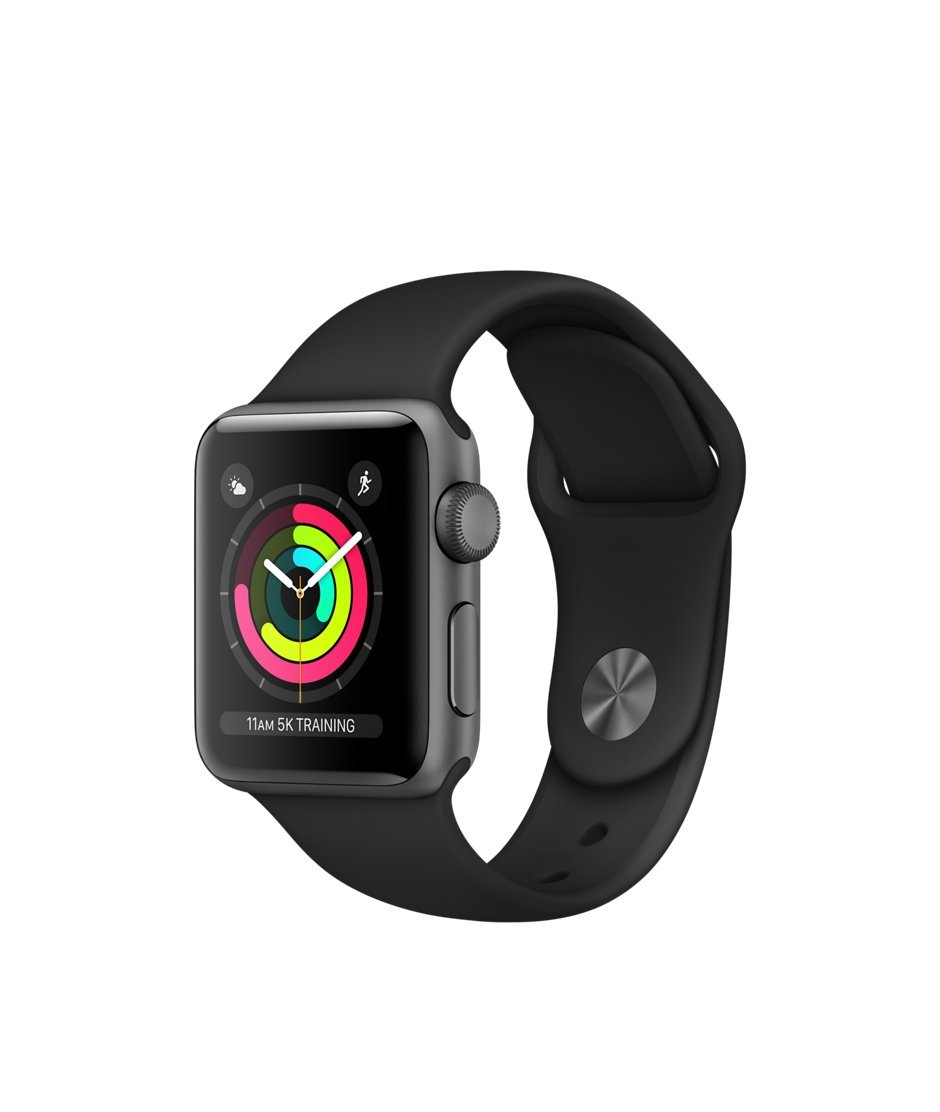 the Ionic in and of itself, so I obviously like the Ionic better. With that in mind, here’s an overview of why.

There are places that the Apple Watch excels, if you are not totally sold on the Ionic. (Related: Fitbit Ionic vs. Apple Watch Series 3)

The Apple Watch is a much better smartwatch – but then, it should be considering Apple is on the 3rd version of the watch. It has plenty of fitness features, too. There is only about a $30 price difference between the Ionic and the Apple Watch 3, unless you opt for the more expensive LTE enabled Apple Watch.

The Ionic was a solid entry into the world of smartwatches by Fitbit, but folks should probably check into our list of other models here. Ionic owners are encouraged to consider sending their models in for a refund due to battery issues, but that said, some might be perfectly happy with them and decide to just keep on trucking. In the end, it’s all up to the customer.

Check out the current price and read customer reviews here