In the battle of the Fitbits, the much-vaunted Ionic was unfortunately burned with a recall notice on March 2, 2022. Fans of the brand might consider their options by reading up on the other better rated units we’ve reviewed here.

The Ionic, which entered the market in 2017, prepared to go head to head with Apple, was far being alone. The Fitbit Blaze (click here to see price) is still immensely popular among critics and fitness fanatics. Performance-wise, how did the Ionic stack up against Fitbit’s initial attempt at the smart fitness watch? Let’s take a closer look.

The Blaze and Ionic have pretty similar looks to them – both have a square shape to the face and have similar bands. It’s tough to say which one looks better since that is entirely a matter of personal preference (okay, we admit that we prefer the design of the Blaze). The Ionic, being newer, has a more vivid screen, so that will be a key design difference.

There are plenty of similarities between the two, including tracking capabilities, heart rate monitoring, smart notifications, and coaching modes. For overall health and wellness, both the Blaze and the Ionic are excellent companions for a healthier lifestyle.

At first glance, the biggest difference between the Ionic and the Blaze is price. The Blaze has been well known for being an affordable entry into smartwatches. The Ionic is priced well for a more advanced smartwatch option. But the Ionic’s list price is $100 more than the Blaze.

What does that extra hundred get you? Quite a few things, actually.

Fitbit fans are saying, “Finally!” to the announcement that the Ionic is water resistant up to 50 meters. For a long time, the lack of water resistance on most devices has been one of the biggest issues for shoppers. Previously, the low-profile and inexpensive Flex 2 provided the only Fitbit option for swimmers.  Now, with the Ionic, you can swim or shower in the device without worry.

The Blaze, like most of Fitbit’s other devices, is splash-proof, meaning it can handle the rain or accidental splashing.

One of the other key differences between these two smart fitness watches is GPS capability. The Blaze has connected GPS, which means that you can connect to your smartphone to utilize GPS features. The new Ionic, on the other hand, has built-in GPS.

With built-in GPS functionality, the Ionic is able to do more tracking and gather more statistics – including distance and pace. It’s one part of a larger move to help you ditch your phone altogether when you work out.

A second feature that enables you to go without your phone on your run is the Ionic’s music storage ability. You can store and play around 300 songs right from the device. The Ionic has Bluetooth connection (and Fitbit is also dropping some wireless headphones to go along with it) so you can listen on the go.

Want to grab a cup of coffee after your run? Now you can without bringing your wallet or debit card along. The Ionic features a built-in NFC chip which stores your payment information. You can pay for your coffee or breakfast right from your wrist.

The Ionic also has the ability to download apps, which the Blaze does not (and likely won’t ever). While there isn’t a huge number of apps available right now (and how well the apps run is yet to be determined), this is something that has great potential down the road. 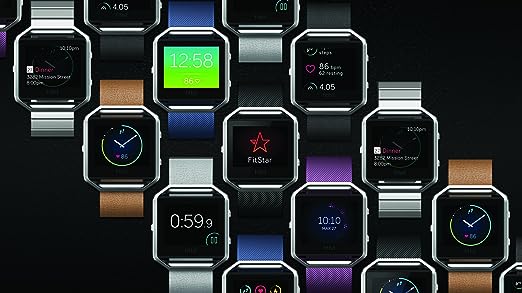 While all the new features on the Ionic sound pretty darn amazing, we don’t want you to think that the Blaze is now obsolete. It may not have the advantage over the Ionic in any category, but it’s still an excellent fitness tracker, and it costs a lot less.

Here is an overview of what the Fitbit Blaze brings to the table:

The Blaze definitely represents Fitbit’s first attempt at a smartwatch look and feel, but it’s a great device that we wouldn’t hesitate to recommend to anyone. If you’re looking to save some money over the Ionic, do consider the Blaze.

The Ionic also borrows some of the key features of the Fitbit Surge – see how the Blaze compares to the Surge in our review here.

We covered a lot of the Ionic’s key points above, but let’s talk about it on its own instead of in competition with the Blaze.

The Ionic is a clever smartwatch that has a strong tie to healthy living. You’ll get everything you want from a smartwatch – apps, notifications, music – plus useful tools to help you get moving, stay motivated, and be healthy.

Because of the initial capabilities of the watch, and because it comes preloaded with Fitbit’s best technology, there are even more features in the works. For example, in September it was announced that Fitbit is partnering with Dexcom to bring glucose testing to the Ionic. We imagine there’s even more to come in the next few months.

Here are some of the initial features to know about the Ionic:

The Ionic has about the same battery life (4-5 days) as other Fitbit devices, BUT, using the GPS function or listening to music will dramatically reduce the longevity. Unfortunately this was a key problem with the make as the battery tended to overheat and break down.

If you haven’t figured it out already, we were big fans of both devices, unfortunately, the company had to recall the Ionic due to it’s lithium battery over-heating. That said, the Blaze is always a good choice…

Choose the Blaze if…