Wireless headphones grow more popular by the day, and not just because you’ve seen your favorite athlete wearing them. The first iterations were simple Bluetooth technology and played sound just as corded headphones would.

Now, most headphones have volume, microphone, play/pause, or even fitness tracking capabilities. When we say the word headphones, we mean a variety of different types of designs. Not every one of the headphones on this list is going to fit “over” your head.

Some headphones are ideal for different situations and can be sweat/water resistant, or sweat/waterproof. To help you decide and categorize which headphones you’re interested in, we’ve split up them up by use and design.

On-ear headphones are the crossroads between in-ear and over-ear but look more like the latter. This type of design is perfect for the person that doesn’t like the overt cushioning of over-ear headphones but doesn’t get all the noise cancellation with in-ear. The SB221’s feature a much thinner band than mainstream on-ear headphones. The band is also designed to be worn on the back of your neck, so you don’t have to waste time fidgeting with it on the top of your head.

The outsides of the stereos have large buttons on them you can change volume or track instantly. 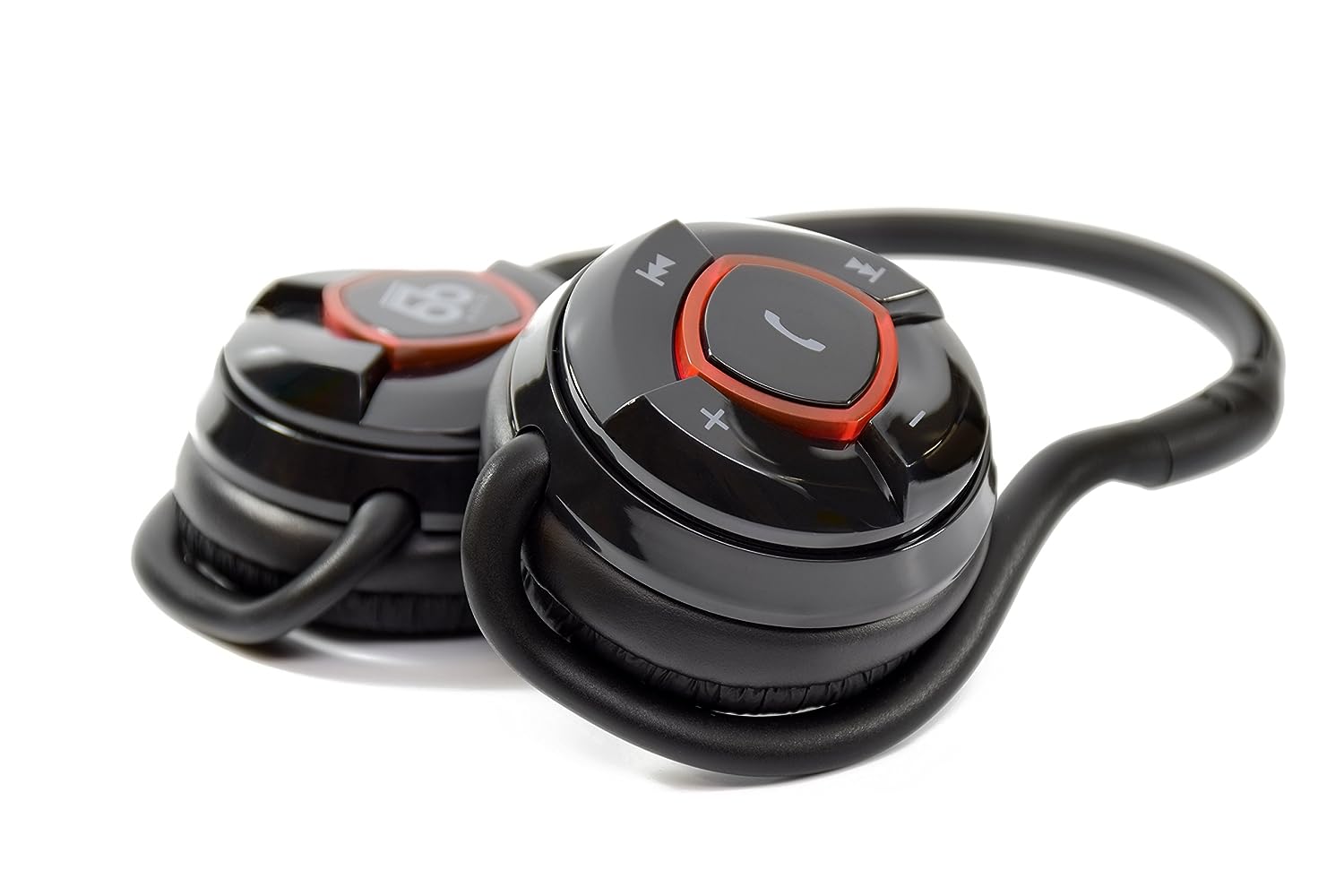 The 66 Audio BTS’ look similar to the SB221’s but feature larger cushions and the buttons are located around the primary pickup button. If you’re a multitasker, you can connect the BTS’ to two different smart devices at once.

On a single charge, you can get nearly 30 hours of life before recharging.

The iSports are the ideal on-ear, over-the-head pair of headphones. They’re not too bulky but provide ample cushioning during high-intensity workouts. They are also sweatproof and water resistant. It probably wouldn’t be a good idea to take them out in a downpour, but they’d do fine in a drizzle.

Monster is also the parent company of the popular Beats by Dre headphones, as a testament to their authenticity.

In-ear headphones are the type you’re most likely to see in the gym or on the track. They’re much less bulky and still give you plenty of noise cancellation. Additionally, some companies are beginning to develop in-ear headphones that can track calories, steps, and heart rate.

If wrist-mounted fitness trackers or smartwatches aren’t your forte, you may want to look into the following headphones. 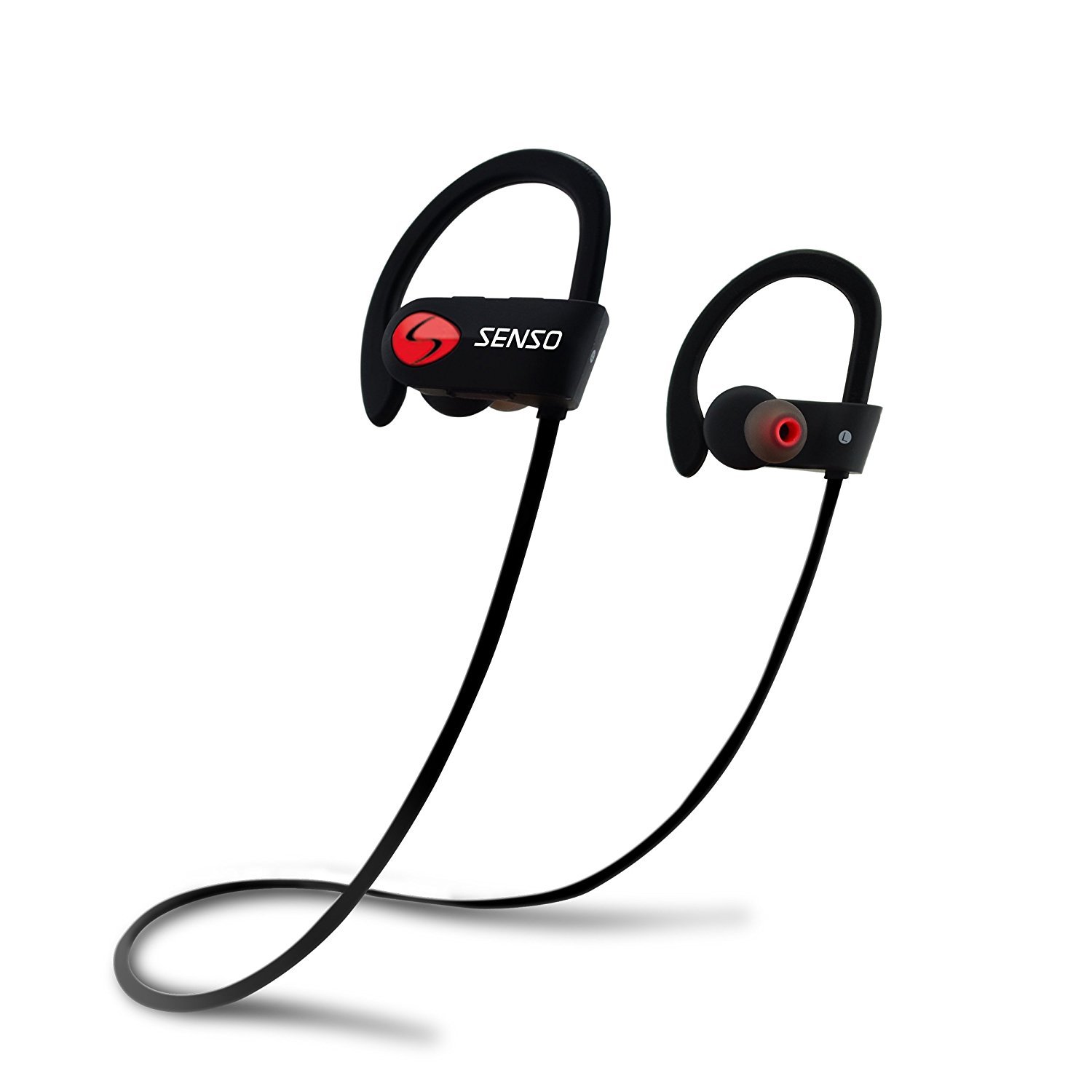 The SENSO headphones have the most reviews of any type of headphones we’ve seen. That being said, they are a very popular series of headphones. Their design is simple and price is the definition of affordable.

They have an integrated microphone and buttons on top of the primary stereo to control volume. 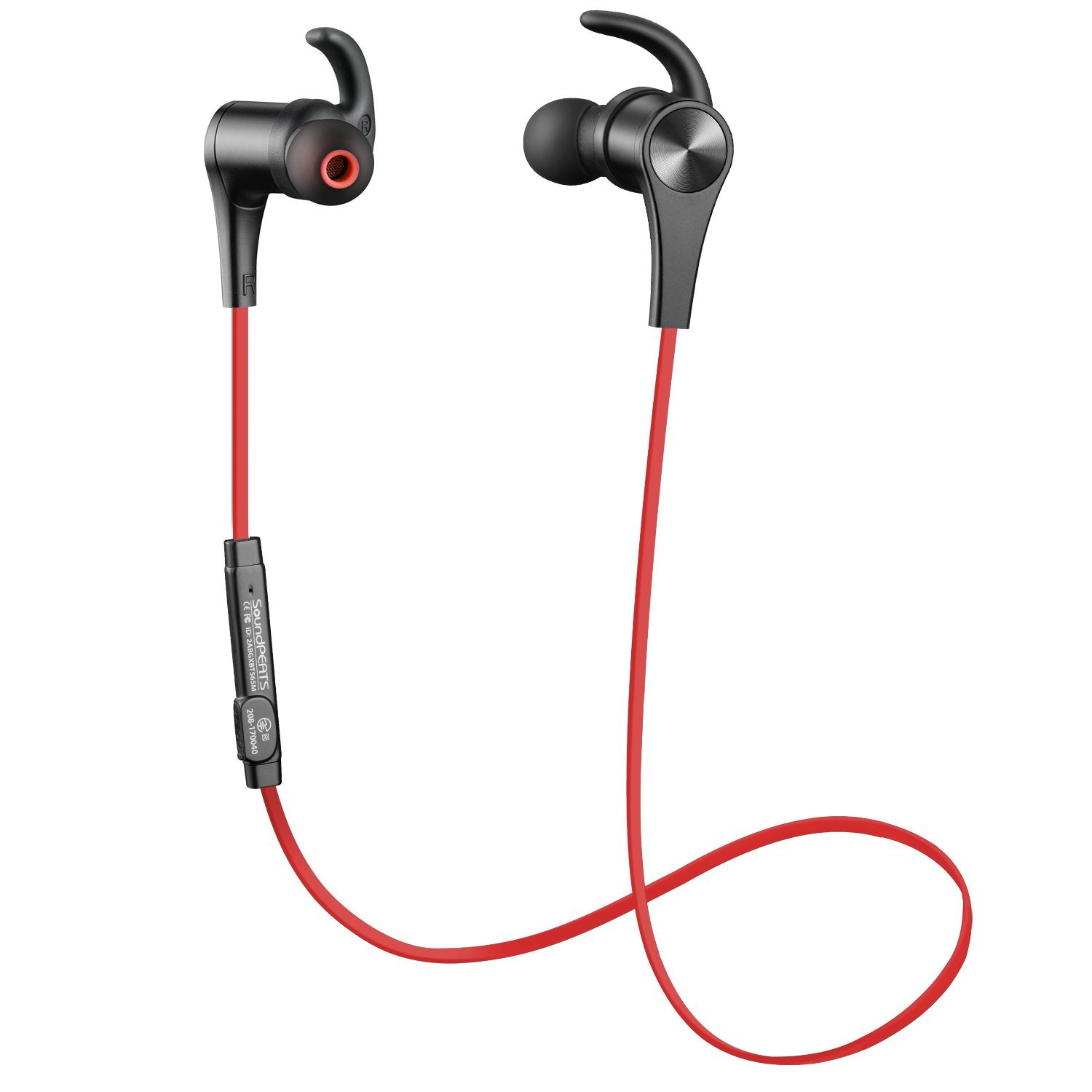 SoundPEATS headphones are a more classic in-ear design that have hooks to stabilize themselves inside your ear. Other wireless headphones like the SENSO’s feature hooks that wrap around the outside of the ear, which can put some people off.

The SoundPEATS are also pretty cheap and widely popular for being a reliable set of headphones. 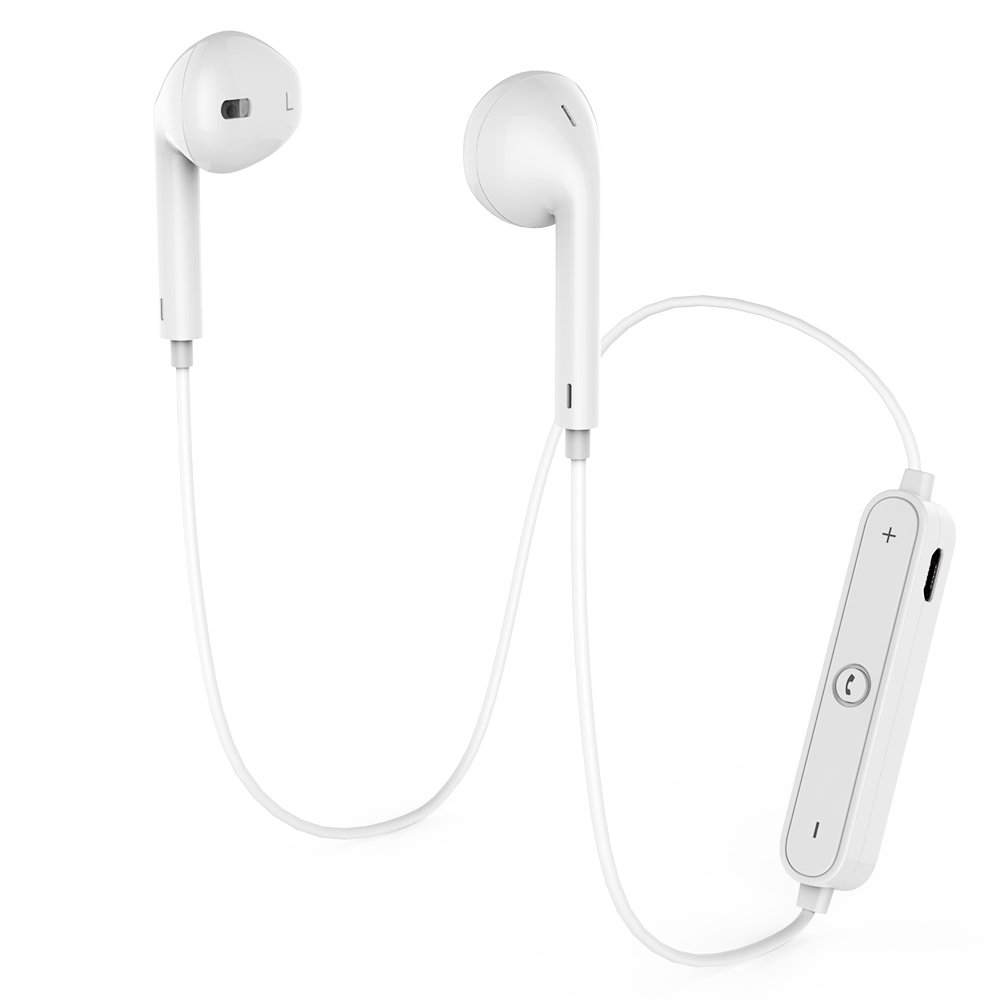 The GEJIN’s are an even simpler looking pair of headphones. If you’ve ever seen an old pair of apple earphones, the GENJIN’s are basically that with a microphone and volume control feature between them.

Most people will find these to be the most comfortable pair of in-ear headphones because they don’t feature any hooks or straps around or in the ear. 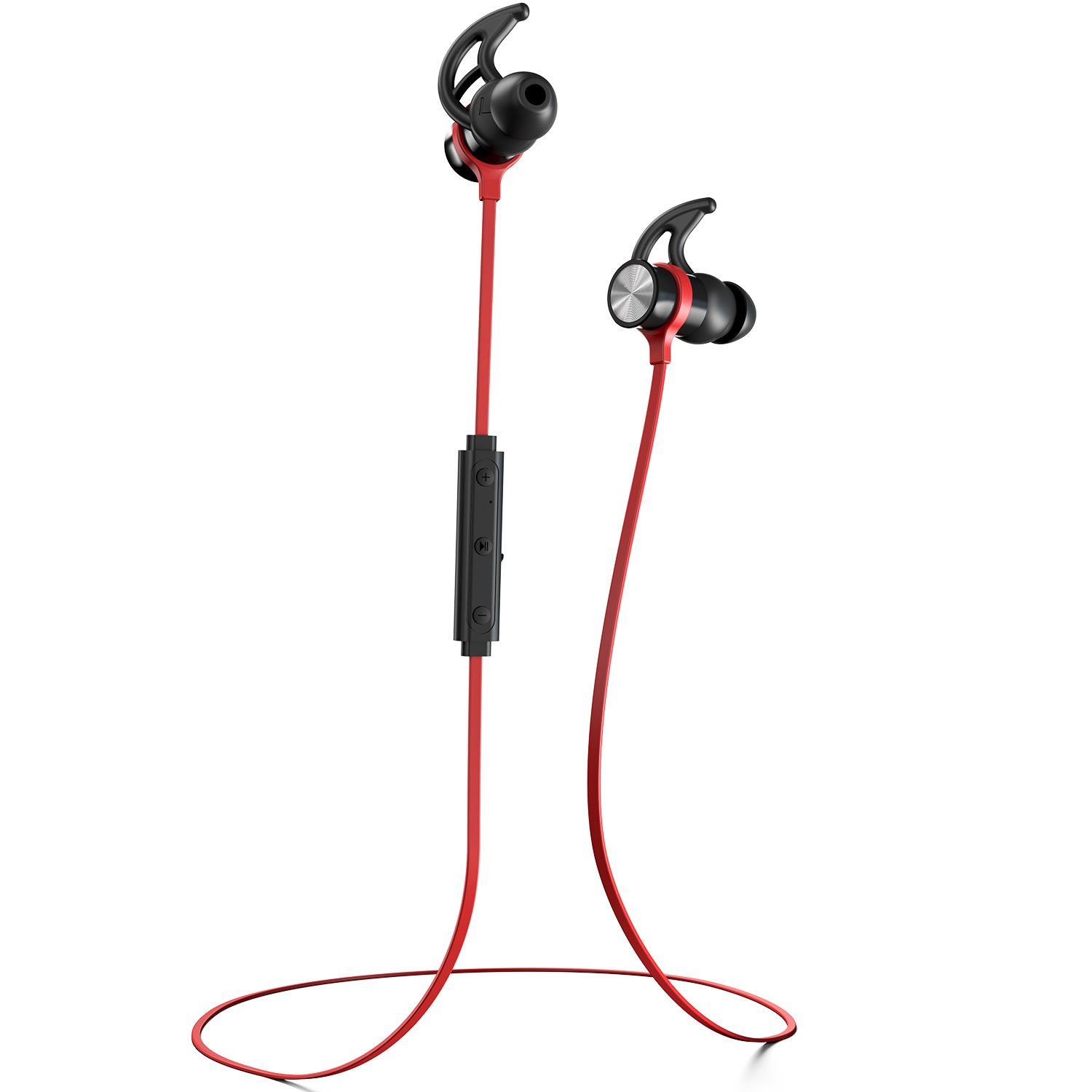 The BHS-730’s by Phaiser are similar in design to the SoundPEATS in that they use the hook design. They also come in a couple of different colors so you can sport a different style. They are sweatproof and will survive a moderate amount of water.

A neat feature about the BHS-730’s is that their backsides are magnetic. When you’re not using them, they clip together to avoid swinging off your neck or getting caught in your clothes. 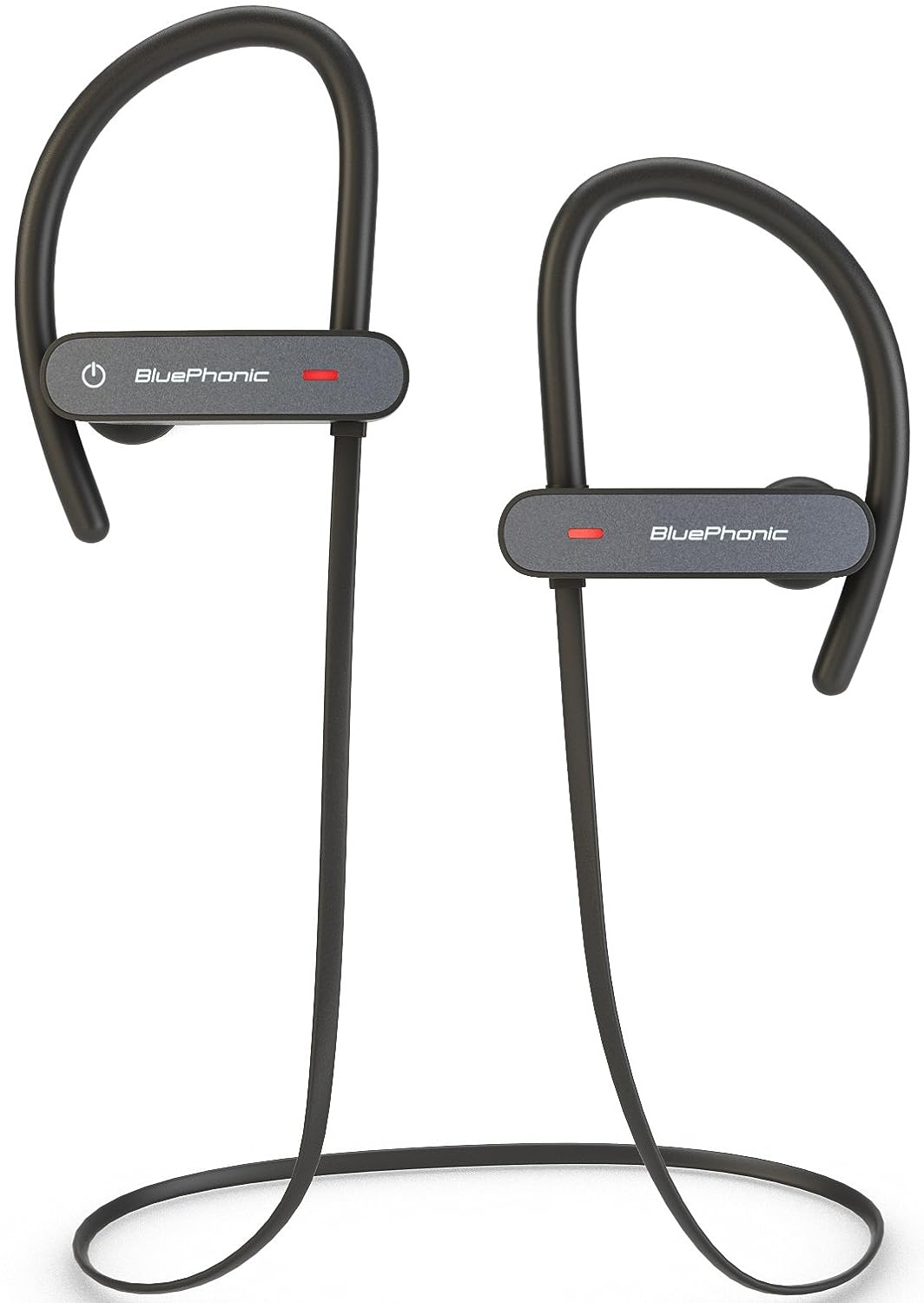 You’d have to do some digging to discover the BluePhonic brand but once you do, you won’t be disappointed. The Z2 HD’s are by far the best pair of wireless headphones in their arsenal, providing nearly eight hours of continuous play.

Their design makes them less bulky compared to other headphones that feature around-the-ear hooks. Despite this, they still have the volume buttons along the primary stereo.

When you’re running, you’ll want the most stable headphones that can handle sweat and the elements. If you’re the cardio junkie who enjoys running in the rain or snow, these in-ear headphones are going to be the best fit for you.

The Backbeat Fits by Platronics features one of the most secure designs among wireless headphones. They have hooks that go around your ears and a band to stabilize them around your neck. The ear tips also allow sound in from your surroundings so you aren’t completely distracted while running.

If you plan on taking them out in the thick of the elements, you should know they are waterproof down to one meter of water for up to 30 minutes. 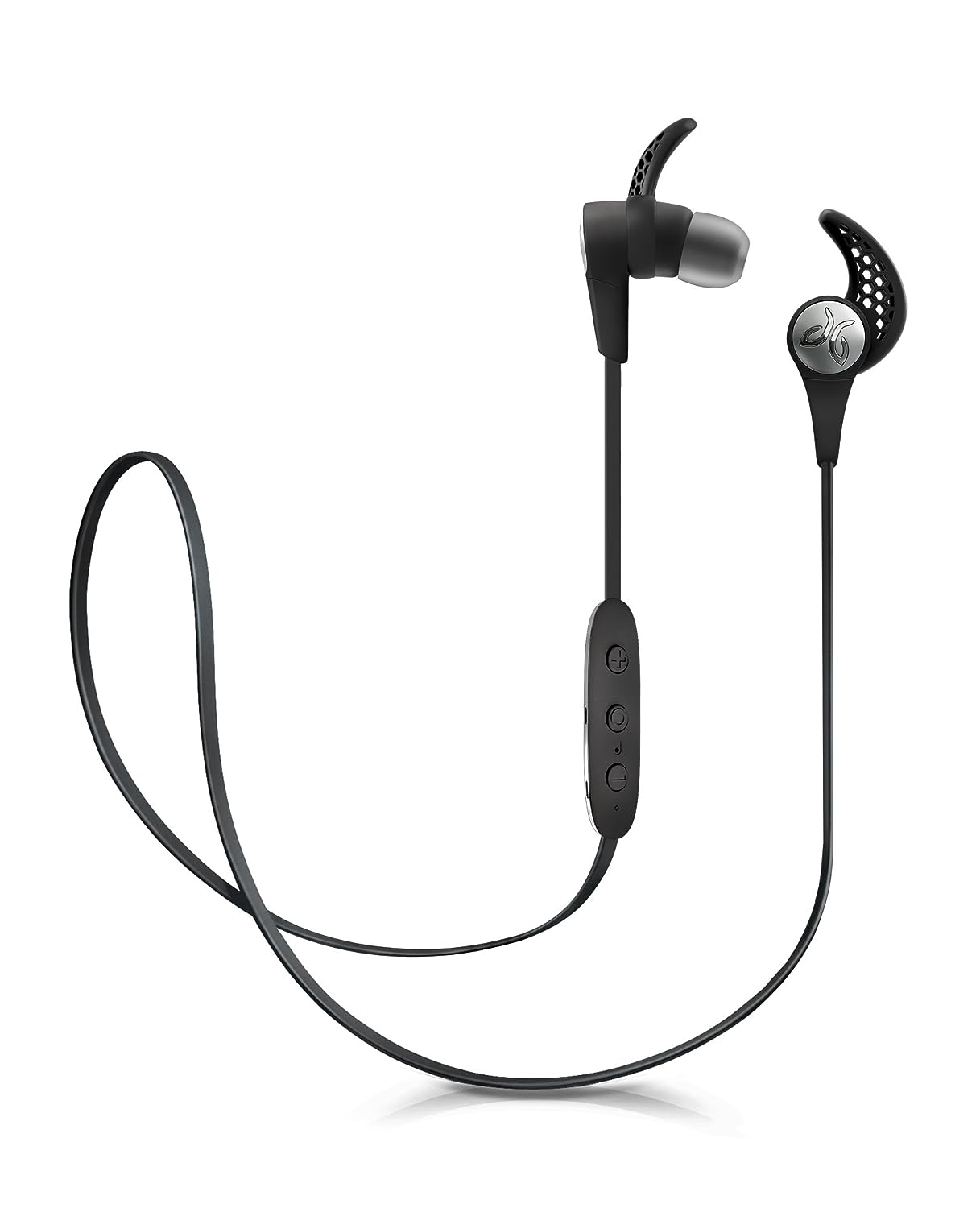 The X3’s by Jaybird are a popular set of in-ear headphones featuring the hook design we’re so used to seeing. What makes the X3’s different is that the presence of the MySound app, which allows you to tweak bass and tremble. In essence, you can personalize your X3’s to produce the ideal amount of sound.

Their dual sweatproof and water-resistant rating makes them ideal for high-intensity workouts and running.

The Elite Sports do not have a cord between them and are simply two very smart earbuds. These earphones also have the ability to track health statistics like heart rate, calorie burn, and speed. You can access these stats via the Jabra Sport life app.

These earbuds also do away with all the charging cords that come with other headphones. Instead, they use a simple recharging case. 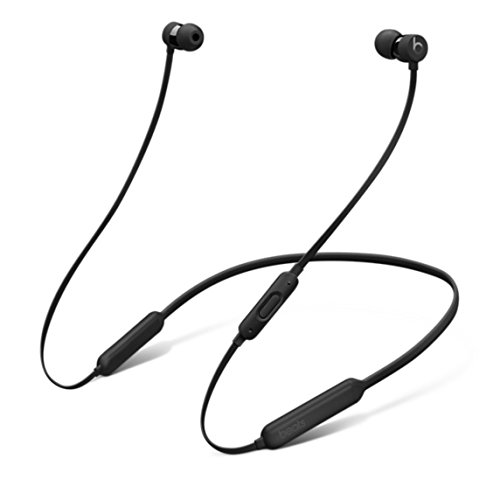 The BeatsX are the simplest pair of earphones you’ll find by Beats. They come as simple earbuds connected by a wire that also contains the microphone and volume controls. The back of the earbuds are also magnetic so they don’t swing around when you’re not using them.

If you feel that they are not secure enough, you can add the customary wingtips to the earbuds for added stabilization.

While you’ll commonly see in-ear headphones in the gym, on-ear and over-ear headphones still make appearances. If you’re not going to the gym to run on a track or treadmill, these headphones will mix style with comfort.

Like most over/on-ear headphones these days, they have adjustable bands across the top. 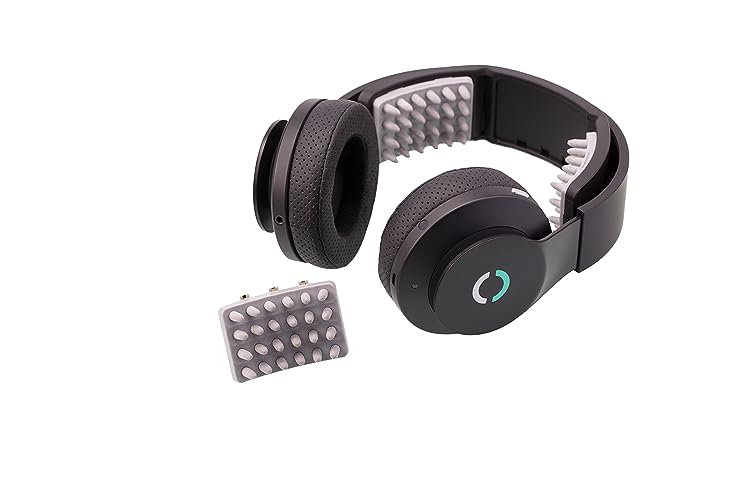 The Halo Sports, developed by Halo Neuroscience, are a bit of an anomaly on our list. These headphones are actually designed to enhance learning and perceptive abilities through the sensors along the inner band.

These sensors activate the motor cortex in your brain, allowing you to focus better on your given workout, exercise, or sport. The science is real, as evidenced by their outstanding reviews, and their partnership with the San Francisco Giants.

The thing with the Halo Sports is that you only need twenty minutes of listening time to your favorite tunes for the sensors to take full effect. Since they are over-ear headphones, you can expect above average noise cancellation.

The V4.1’s by Dylan are a very simple set of over-ear headphones. They can sport anywhere from 8-15 hrs of playtime depending on volume level. Judging from how well the stereos cushion your ear, you won’t need a lot of volume to get the most out of your music.

They are also foldable on both sides of the band so you can carry them with you in a compact case. 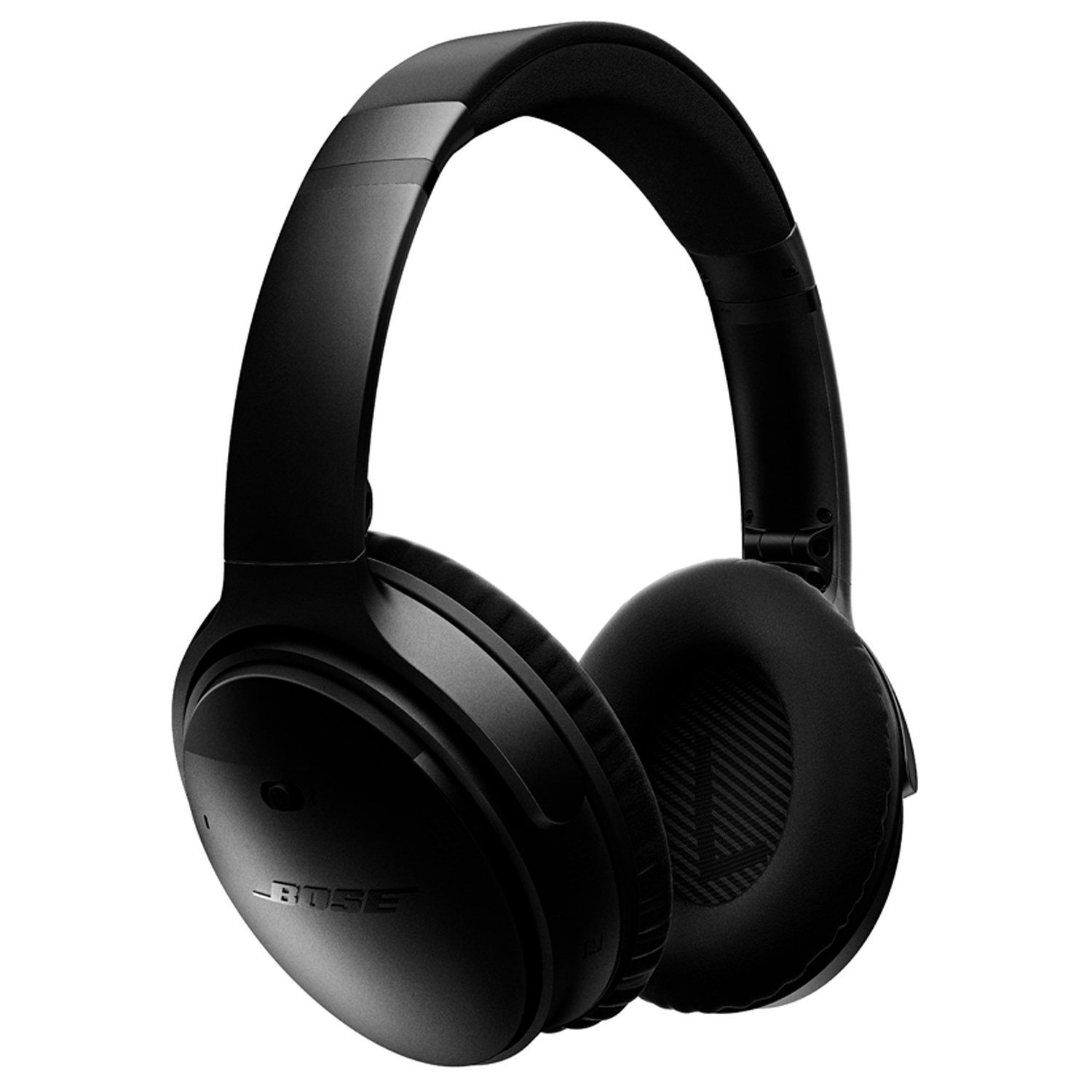 Bose is an industry leader in sound cancellation technology, so its no wonder that the QuietComfort 35 is a popular set of headphones. Though expensive, they sport the longest battery life of any set of headphones on our list.

If you’re someone that makes and takes calls on the regular, the QuietComfort 35’s noise cancellation technology will filter out windy environments. 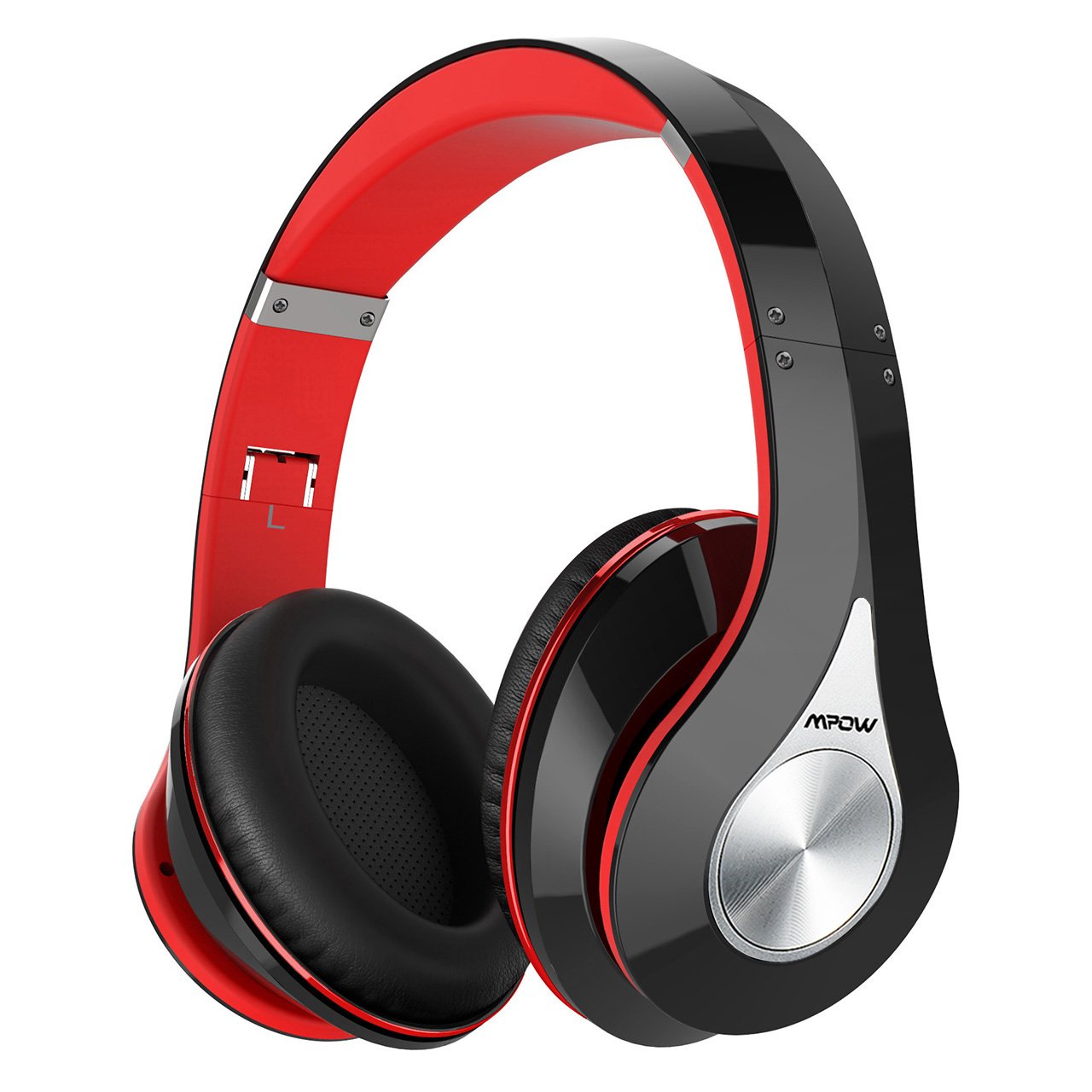 They’re cheap, they’re stylish, and they’ve got great sound quality. The Mpow’s do it all and there’s a variety of methods to amplify your experience. There are buttons on the primary stereo to change volume and track. You can also have unlimited battery when it’s plugged in via wire.

If you’re particular about style in the gym, they also come in different colors. 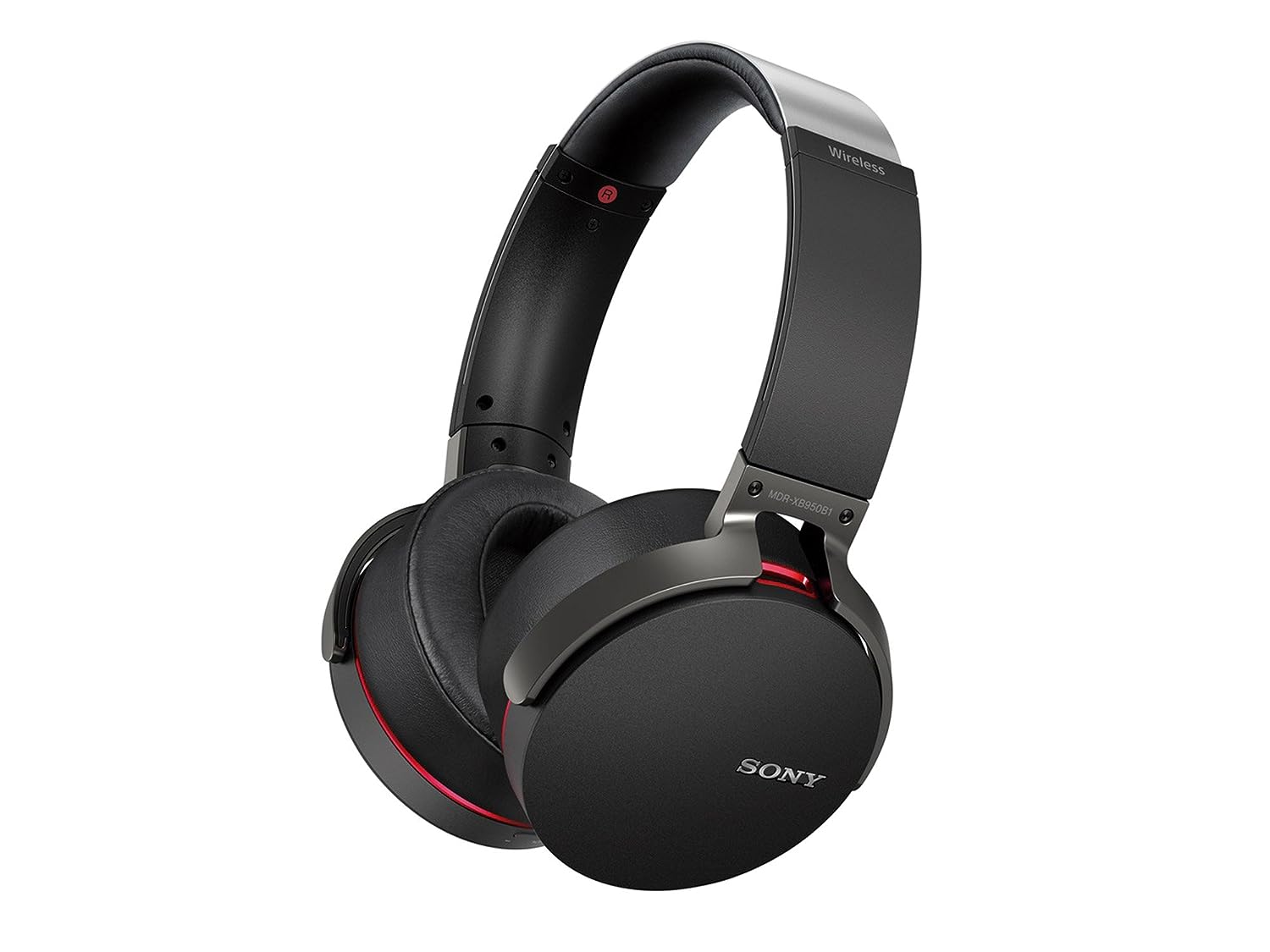 Sony has a particular design with their headphones which places more emphasis on versatility than straight sound quality. The stereos on the XB950B1’s and their cushions adjust to head and ear movements. When you’re bent over they won’t slide off your ears and head.

You also have the ability to optimize sound quality through the Sony Headphones Connect app.

Maybe you want an extra pair of headphones for relaxing and letting the sweet vibes take over. Comfort and sound quality are going to take priority over anything else with these headphones, as they should when you’re relaxing! 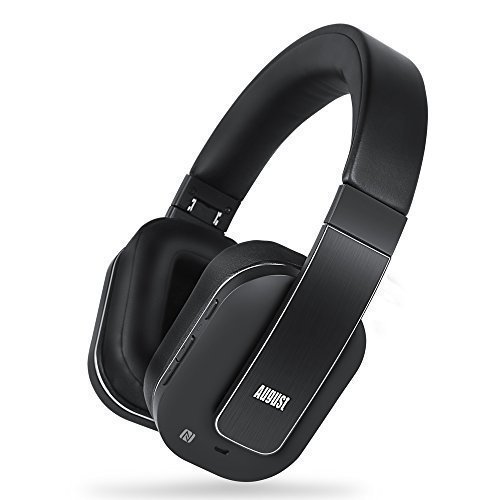 The EP650’s by August feature a little different stereo design, being slightly more square than circular. Don’t worry, this doesn’t change the sound quality whatsoever, but some people may find them more comfortable than ones that encompass their ears.

There are small buttons along the rims of the stereos that allow you to change volume, tracks, and manage calls. 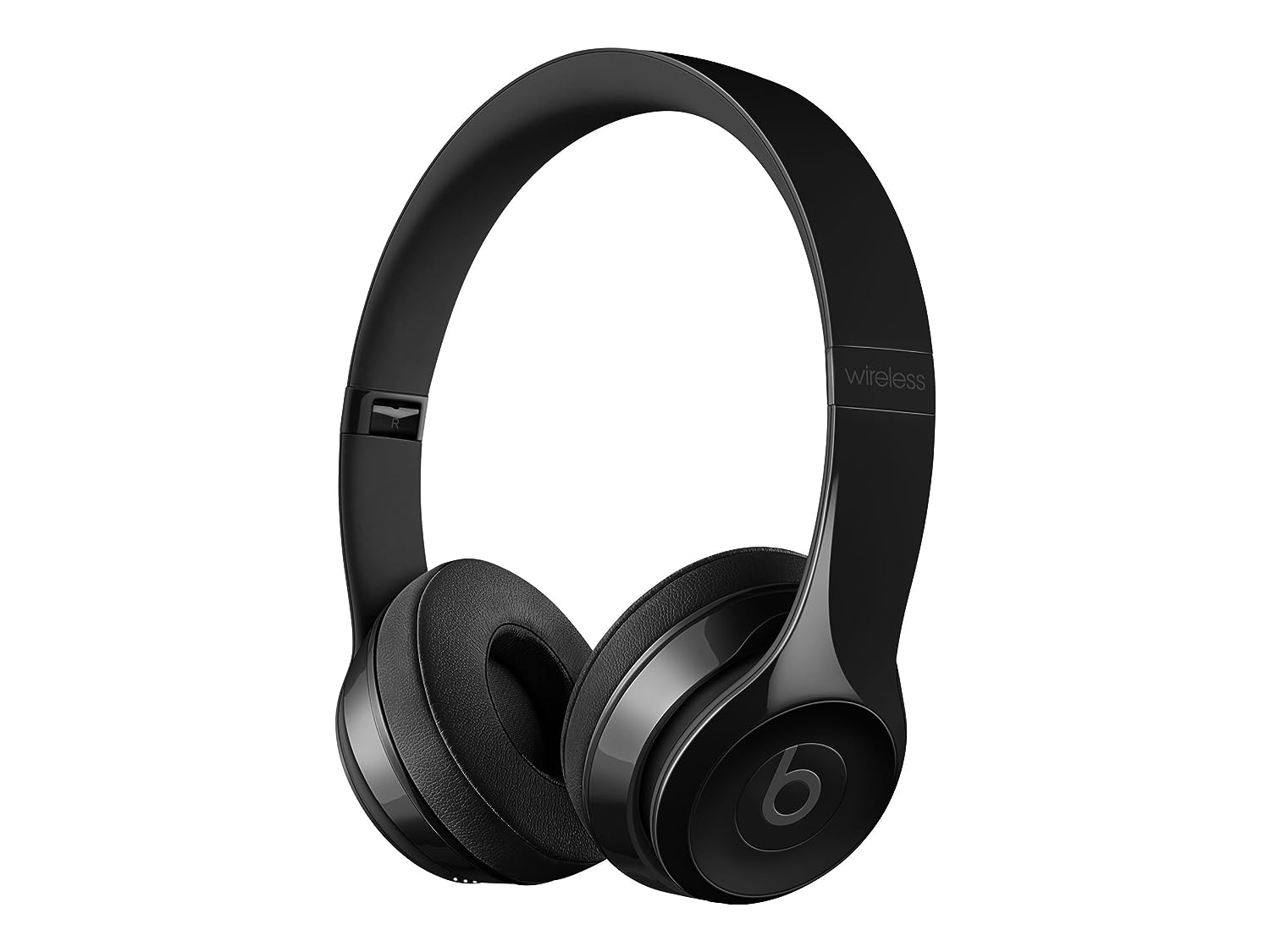 The Solo3’s are the first set of headphones in the Solo series to come completely wireless. They’ll be pricey for sure, but sound quality and cancellation is going to be top-notch. The primary stereo holds the buttons to manage calls and music.

As is customary with Beats headphones, you can choose from a variety of bright and flashy colors.

The headphones we listed can be used in all different circumstances, but you should be aware of the sweat and water rating. This will be the primary determiner if you should take your headphones running, to the gym, or keep them indoors.